AG Nadiadwala Passes Away: Abdul Ghaffar Nadiadwala alias AG Nadiadwala, the producer of the films ‘Hera Pheri’ and ‘Welcome’, passed away on 22 August. He was 91 years old and reportedly died due to cardiac arrest. After his demise, Bollywood actor Ajay Devgan paid tribute to him on Twitter.

Ajay Devgn recalled that his father Veeru Devgan and AG Nadiadwala were close associates who worked in the ‘golden age’ of Bollywood. In a tweet, he wrote, ‘Deepest condolences on the passing away of Shri Gaffarbhai Nadiadwala. My father and he were our collaborators during the golden age of cinema. May AG Nadiadwala sahib rest in peace. My condolences to the Nadiadwala family. 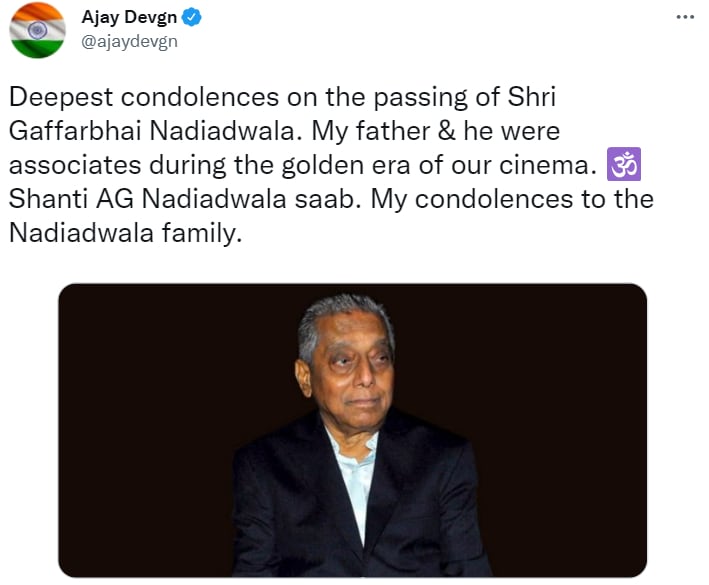 According to Bollywood Hungama, AG Nadiadwala suffered a heart attack during treatment at Breach Candy Hospital in Mumbai. His son producer Firoz Nadiadwala told the media that the producer had passed away at 1:40 am. AG Nadiadwala was reportedly in the industry since 1953. For nearly seven decades, he was a part of many popular projects like ‘Mahabharat (1965)’ starring Pradeep Kumar and Dara Singh.