Swara Bhaskar She is one of the bindaas actresses of Bollywood. Apart from her films, she is also known for expressing her impeccable opinion on socio-political issues. The actress, who is active on social media, praised the film ‘Laal Singh Chaddha’ fiercely. Swara liked Aamir Khan very much but at the same time praised the work of other actors of the film.

Seeing the film ‘Lal Singh Chaddha’, Swara Bhaskar tweeted on Wednesday and praised the casting of the film. The actress wrote, ‘Watching Lal Singh Chaddha’. Already the strings of the heart are being pulled. It has to be said that Aamir Khan is in the role of a handsome Sikh, as well as Little Lal and Little Rupa are also very cute. And Mona Singh took her heart. 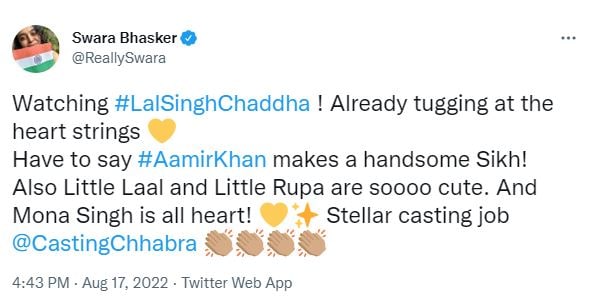 All the actors of ‘Lal Singh Chaddha’ are brilliant
Aamir Khan and Kareena Kapoor are in lead roles in ‘Lal Singh Chaddha’. At the same time, Mona Singh has played the role of Aamir’s mother Gurpreet. Ahmed ibn Umar played the childhood role of Aamir. This is the Bollywood debut film of South actor Naga Chaitanya, who plays Aamir’s friend Balraju. In the official Hindi remake of the 1994 Academy Award winning Hollywood film ‘Forrest Gump’, every character, including Aamir Khan-Kareena Kapoor, has done a splendid job. The Hollywood film was based on Winston Groom’s novel. Aamir has lived the role of Tom Hanks on screen.

Ranveer Singh would like to see the sequel
‘Lal Singh Chaddha’ has been released in theaters on 11 August. Aamir Khan has appeared on the silver screen after a long time with this film. Not only Swara Bhaskar, many Bollywood celebrities have praised the film. Hrithik Roshan has described the film as ‘Magnificent’, while Ranveer Singh liked this film so much that he wanted to see the sequel.

Richa Chadha praised in this style
Neha Dhupia requested people to watch this film, calling it magic. At the same time, Richa Chadha had also tweeted and said that ‘As Chadha, I wholeheartedly support Lal Singh Chadha. The film also makes you laugh and also makes you cry.