Bengaluru’s team has moved to third place after securing its third win of the season.

Gujarat has also benefited from the second win and has moved to the sixth position.

Dabang Delhi, which has won five consecutive matches, has occupied the first place.

New Delhi. In the Pro Kabaddi League on Wednesday, Gujarat Giants registered their second win of the season by defeating UP Yoddha. Gujarat won this match with a margin of 51-45. Most points of the season have been made in this match. Two players each from both the teams put on Super 10s. Gujarat captain Chandran Ranjit scored the highest 19 raid points. Pradeep Narwal also took 17 raid points, but he could not win his team. In another match, Bengaluru Bulls won a big win against Tamil Thalaivas. Bengaluru registered their third win of the season by defeating Thalaivas by a margin of 45-28.

Raiders of UP Yoddha and Gujarat Giants scored points continuously. UP also got Gujarat all out once, but Gujarat captain Chandran Ranjit did not let his team lag, Ranjit completed his first Super 10 of this season, but by half time, UP was on a two-point lead, UP’s Pradeep Narwal scored 8 and Surender Gill scored five raid points from the side.

Gujarat dominated UP in the second half
In the second half, UP was all out and Gujarat led 25-23 with two points. Later, Ranjeet put a raid of 4 points and sent UP again close to all out. In the seventh minute, UP was again all out and Gujarat went ahead 37-29. Surender completed his Super 10 by putting a super raid. Soon before the end of the match, UP was all out for the third time and Gujarat took a good 11 point lead. After this the team of UP could not make a comeback.

Panthers beat Titans by a huge margin, Paltan turned the match in the last raid 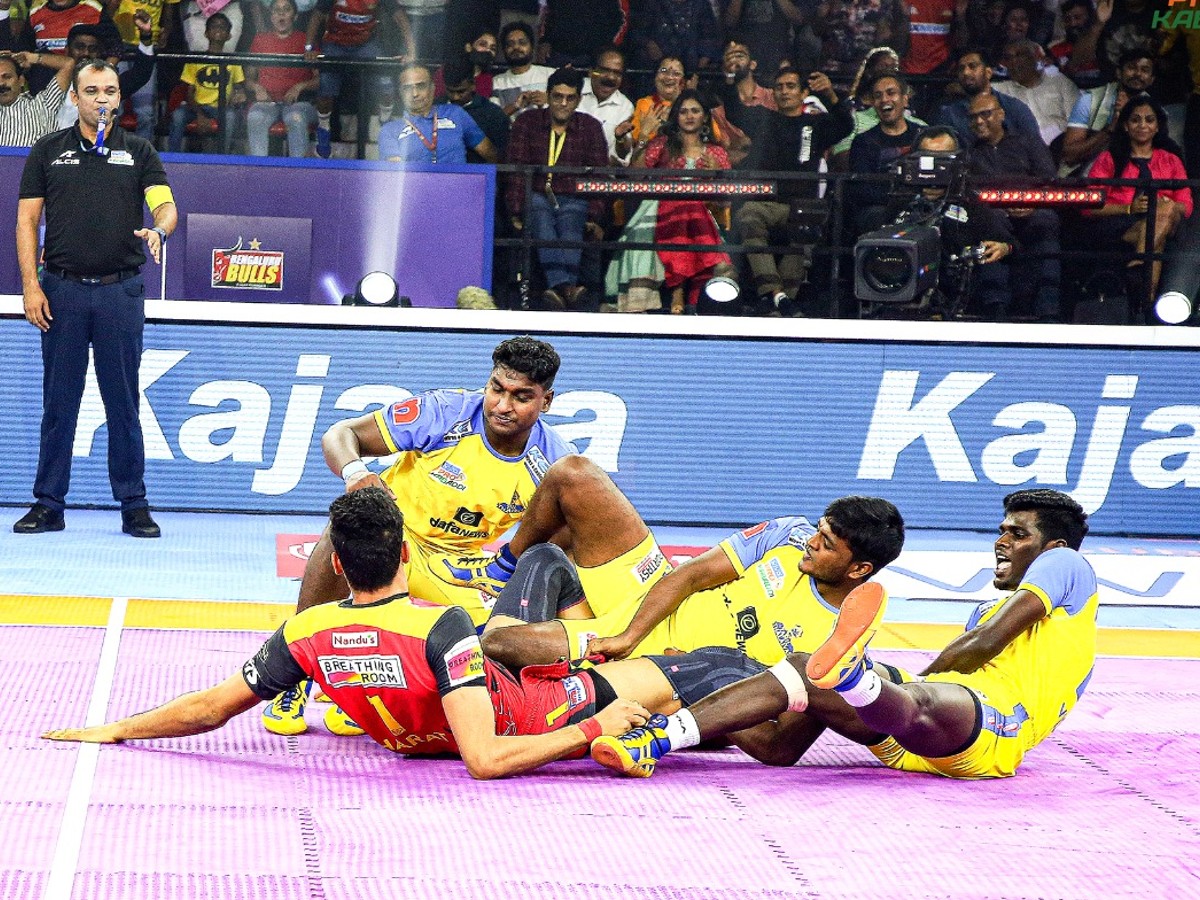 Bengaluru Bulls beat Tamil Thalaivas by huge margin
In the 29th match of Pro Kabaddi League (PKL) 2022, Bengaluru Bulls registered a big win against Tamil Thalaivas. Thalaivas by a margin of 45-28. Bengaluru got its first win after suffering two consecutive defeats. At the same time, Thalaivas got the third defeat of this season. Bangalore dominated from the beginning of the match and they did not give chances to Thalaivas. In the seventh minute, Thalaivas was all out and Bengaluru took a six-point lead in the match.

Thalaivas made a good comeback after being all out and did not allow Bengaluru’s lead to exceed five points till half time. Narendra Kandola was once again seen fighting alone for the Thalaivas and he took seven raid points. In the second half also, Bengaluru dominated and they again all-out Thalaivas in the sixth minute. Thalaivas kept trying to make a comeback, but the match went out of his hands. Vikas Kandola played well in the last five minutes and took five points to get a total of seven points in the match.

Pro Kabaddi League Points Table
After winning the third win of the season, Bengaluru’s team has moved to the third place. Gujarat has also benefited from the second victory and they have come to the sixth position. Dabang Delhi, which has won five consecutive matches, has captured the first place. UP is out of the top six.