Priyanka Chopra has put the location of this picture as Kashmir. Sharing the picture, Priyanka Chopra wrote, “Happy Birthday Dad. We miss you. Everyday.” Priyanka’s husband and singer Nick Jonas commented on this post of Priyanka. Nick has commented a red heart emoji in the comment. 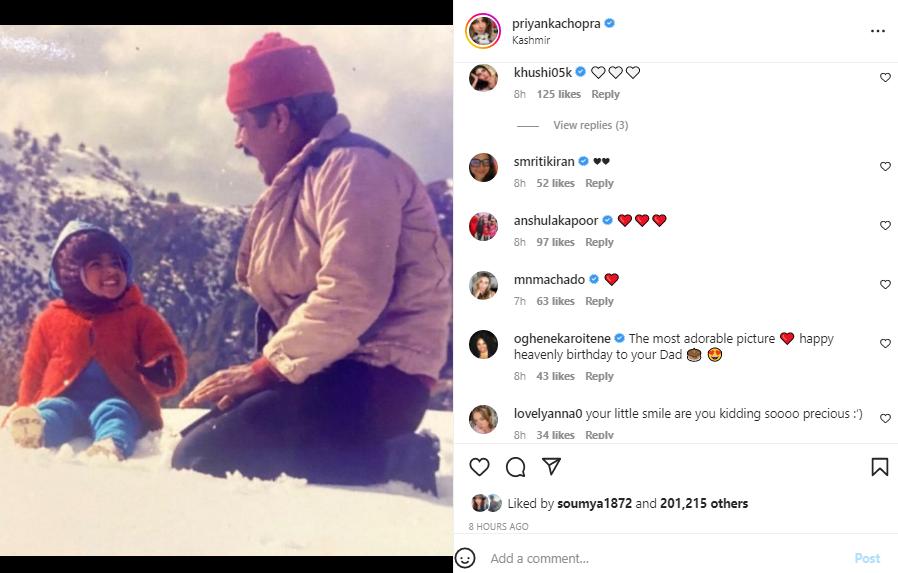 Apart from Nick Jonas, Khushi Kapoor also commented on the white heart emoji. Arjun Kapoor’s sister Anshula Kapoor also commented on the red heart emoji. Apart from this, her fans and followers are also showering love by commenting on this picture of Priyanka and praising her cuteness. This picture shared a few hours ago has got more than 2 lakh likes.

Let us tell you, Dr. Ashok Chopra died in 2013 after a long battle with cancer. He was a doctor in the Indian Army and breathed his last at the age of 62. He was very close to Priyanka. Priyanka often talks about how she was badly broken after the death of her father. His father’s death took a toll on his mental health.

Priyanka Chopra’s daughter Malti is protected by her beloved papa, the actress shared the photos and proofs

Priyanka Chopra has got a tattoo of ‘Daddy’s Little Girl’ in her handwriting on her wrist. Priyanka often talks about how her father was her biggest cheerleader. At the same time, Priyanka and Nick have become parents this year through surrogacy. In January this year, he welcomed daughter Malti Marie Chopra Jonas. Although he has not yet shown the face of the daughter.