Sonam Kapoor (Sonam Kapoor) and Anand Ahuja have become parents of a baby boy. The couple welcomed their first baby on August 20. Both shared the good news of having a baby boy with the fans through their respective social media posts. Earlier, Neetu Kapoor shared the good news of Sonam becoming a mother with the fans. Since then, the fans started congratulating Sonam and Anand continuously. Sonam also shared a note announcing the birth of the baby.

Sonam Kapoor wrote in her note, “On 20.08.2022, we welcomed our beautiful child into this world with an open heart. Thank you to all the doctors, nurses, friends and family who have supported us on this journey. This is only the beginning, but we know that our lives have changed forever – Sonam and Anand.” 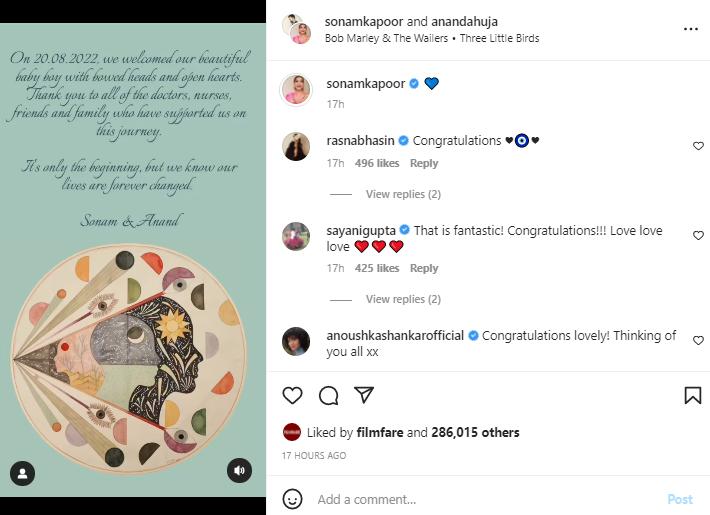 Shortly after this, Sonam Kapoor shared the cover page of Vogue magazine and told that her priorities have changed after having a baby. Sonam got a photoshoot done for the magazine with a baby bump. Her baby bump is visible in this. She is seen lovingly holding her baby bump and posing for the photo. This was Sonam’s selfish decision

In its caption, Vogue India, tagging Sonam Kapoor, has written one of her statements in the caption. Sonam said in her statement, “Priorities change and I feel that the child will be mine. The truth is that she (baby) did not choose to come into this world. We have decided to bring him here, so it is a very selfish decision.”

The good news of pregnancy was given to fans in March.

Let us tell you, Sonam Kapoor and Anand Ahuja announced their pregnancy in March 2022 with some stunning photos on social media. Since then, Sonam has been showing fans glimpses of her pregnancy journey. Talking about the work front, Sonam was last seen in ‘AK vs AK’. She was last seen on the big screen in ‘The Zoya Factor’. She will next be seen in the crime thriller ‘Blind’, which will air on OTT.