On the day of Nagpanchami, the Goswami Tulsidas Akhara of Varanasi was more buzzing than days. The dust-laden women were showing the jauhar of wrestling. It was not possible to see such a scene till a few years ago. Because Dangal, which is still considered a male-dominated sport in most places. Especially the wrestling of the arena. A similar practice was going on in Varanasi for years. But in the year 2017, this practice broke. Goswami Tulsidas Akhara, located in Bhadaini, made the new idea of ​​increasing the participation of women in wrestling come true. Its Mahant Prof. Vishwambharnath Mishra. Some believe that the reason for the breakdown of this practice is the ‘IIT temper’ in religion and culture. Mahant Vishwambharnath sees this by connecting it with equality of men and women.

You must have heard that song from Salman Khan’s film ‘Sultan’, ‘Khoon Mein Tere Mitti, Mitti Mein Tera Khoon, Upar Allah below Earth, Mein Tera Junoon…’. So on the day of Nagpanchami in Goswami Tulsidas Akhara, similar passion was visible on the faces of women wrestlers. Clay-clad female wrestlers were seen worrying the front with their bets. When his coach was seen encouraging him, the crowd of domestic and foreign spectators in the middle of the game was making the occasion brighter. 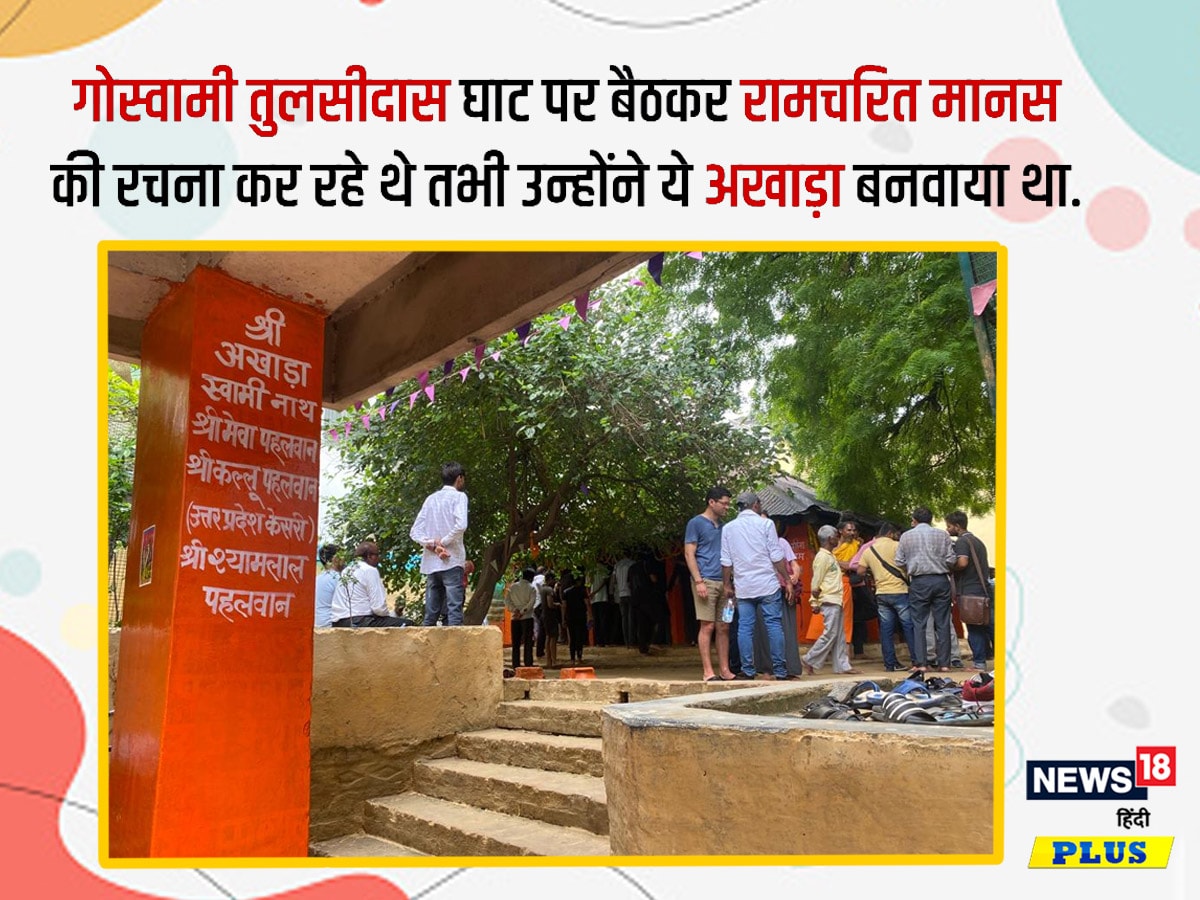 Goswami Tulsidas built the arena
There are many stories about this arena. It is said that when Goswami was composing Ramcharit Manas sitting at Tulsidas Ghat, then he built this arena. Actually, when he used to compose, some domineering and mischievous elements used to run away with his belongings. After much persuasion and pleading, when he did not agree, Tulsidas ji got an amphitheater built there. Wrestlers used to wrestle. Tulsidas ji also used to perform Riyaz (fighting wrestling) in this arena. The effect of this was that due to the fear of wrestlers, the domineering and mischievous elements stopped coming there and Tulsidas started his work without any problems.

About this akhara, Mahant Vishwambhar Nath Mishra, who is also a professor at BHU IIT, tells that Hanuman ji is the god of strength, intelligence and learning. Tulsidas ji considered him as his guru. Tulsidas ji believed that worship and service can be better only when a person is healthy. Along with food, Riyaz is also needed to stay healthy. That is why Goswami ji laid the foundation of this Akhara. Since then it has become a tradition here. People come and do Riyaz.

Mahant Vishwambhar Nath Mishra told that for years, only male wrestlers used to kill Riyaz in the arena here. Even the entry of women was barred. A few years ago, when some girls wanted to practice in the arena, people objected. When he came to know about this, he said that the foundation of this arena is for health and safety. This is also necessary for girls. Then why can’t girls practice? Only after this Mishra allowed the girls to practice here. Since then 12 to 15 girls started coming to the arena to kill Riyaz and fight wrestling. There is a practice of wrestling here on the occasion of Nagpanchami. Wrestlers have wrestling. In the year 2017, we organized a wrestling competition for men as well as women here. This was a new beginning. Now girls are also getting encouragement. Many girls practicing here are doing well at the state and national level.

Srishti, who came to fight wrestling, says, I have been practicing for the last 5 years. Earlier used to play Taekwondo. I do wrestling now. I practice in the arena in the morning and then in the evening at BHU. I have played at state level. The dream is to play for the country. Regarding her routine, she says, the routine of wrestlers is fixed. We have to take diet along with exercise in a schedule from morning till night. Along with this, rest too. It feels good that now in Banaras also women wrestlers get so much love and respect.

Wrestler Anjali is doing BA from Kashi Vidyapeeth. She practices from class 6 itself. His father was also a wrestler. She says times have changed. Now wrestling is just wrestling. Women and men are all equal. We practice the same way as men. Men learn and try the same bets. There is no longer any difference in this. Features of the Arena
Some of the bets of the arena have gained worldwide fame. Like it is claimed that ‘Dhobia Pat’ wager is the discovery of this arena. It was invented by the wrestler Mahant Swaminathan here. With this bet, he had made the country’s leading wrestler, Ramamurthy Pehelwan, all four in one go. Along with this, there are bets like Dhok, Chaumukha Kala Jung, Newaz Band, Halarboon, Sakhi, Motichoor, Machhi Gota and Saad which the world has adopted and tried. Due to being on the side of the ghat, the wrestlers here perform rituals in the arena and take a dip in the Ganges only after being soaked with mud. If you swim, it becomes pleasant to sleep in Riyaz. Here they get to eat gram-jaggery from the arena, which is also a good diet or breakfast for them. Kathleen, who came from the Netherlands, says she was surprised to see this. She has been watching, reading and understanding Banaras from the perspective of music, religion, knowledge, yoga, spirituality and culture. For the first time I am also seeing him through the eyes of wrestlers. I can say, all these things make Banaras priceless.